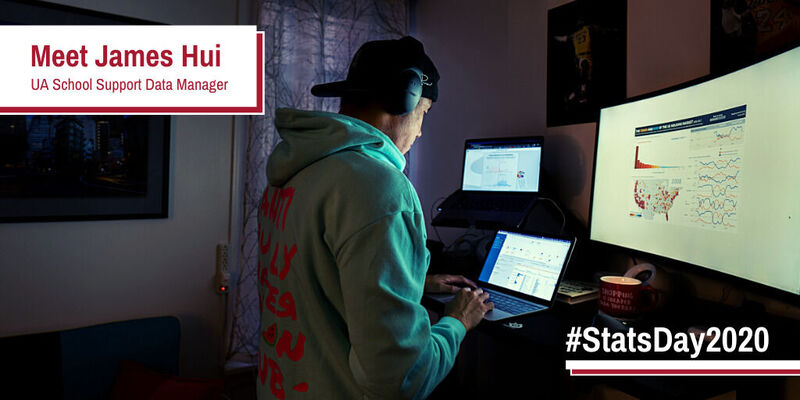 IN HONOR OF #STATSDAY2020 WE SAT DOWN (VIRTUALLY) WITH JAMES HUI, UA’S SCHOOL SUPPORT DATA MANAGER, TO FIND OUT A LITTLE MORE ABOUT THE PHILOSOPHY THAT UNDERGIRDS HIS DATA-DIVING AND NUMBER-CRUNCHING. READ MORE:

To know James Hui is to be a little shocked that he once dreamed of being an accountant. Picturing the UA’s resident extrovert toiling away solo on balance sheets or tax forms just doesn’t seem to fit. But follow his journey from that original career plan to now, and you’ll see exactly how those two seemingly divergent sides of James work so effectively together in his role managing data at the Urban Assembly.

Growing up in San Francisco, James’ family was laser focused on education and signed him up for enrichment programs filled with arithmetic drills and mental math challenges. It was there that James discovered his aptitude for calculations, which propelled his journey to San Francisco State as an accounting major. Although he eventually switched course to marketing, his comfort with numbers would continue to play a large role in his life.

Three years, and one stressful midterm election, later, James found himself back in school at NYU Wagner Graduate School of Public Service for a Masters in Nonprofit Management and Policy. His mind filled with numbers yet again, but with the desire for social change driving new intention behind those ones and zeros. He particularly loved using the power of models to predict societal trends and provide opportunities for positive impact.

After graduation James used his newly developed skills to help improve the lives of his neighbors back in California at the Community Housing Partnership, a nonprofit focused on homelessness and mental health. Though this work was more rewarding, he became drawn to roles where his capabilities could have more impact with young people that didn’t have the opportunities that shaped him as a child. Once again, he packed his bags, and this time headed off to NYC to join the Urban Assembly.

James was drawn to the UA because of its unique model of developing adult school leaders and staff members. James saw the potential of this model to support more young people over time - consistently building capacity and community rather than repeating the same programming in student cohorts that consistently turn over. In his role as School Support Data Manager, James works directly with the UA’s school-based teams to hone programs toward their highest level of impact. When you ask James what he loves most about his role the answer always bends back to the person involved and impacted by the data he crunches: “Really the best feeling is being able to provide helpful insight through data... seeing a teammate get surprised, and then use what they learned to tweak their model or think in a new way about their program.”

James too is a capacity-builder who uses divergent thinking to help others see beyond the numbers. One of James’s most important questions is “Does the story here make sense?” He often pushes past questions like “tell me the percentage breakdown” or “what’s the average?” to help others wonder about things like patterns over time, or how a data story could be built from multiple sources.

After two years at the UA, James is excited to see what the future holds. He is inspired to more clearly develop the link between school programs and outcomes via advanced regression models only he has the talent to dream up. He believes “that’s what’s really exciting for people who invest in our work because it shows exactly what levers we’re pulling and what the impact is.” Unlike others in the field, worried about algorithms taking their jobs, James is intrigued by machine learning and its potential for the future. Probably because, for the first time, he has a job that makes use of the best parts of him -- James the analytical and the human. From an early age, he loved numbers and was intrigued by calculating them, but it wasn’t until those numbers represented people, stories, possibilities, and opportunities that James found purpose.

The Urban Assembly is hiring for the role of School Support Data Manager. Come join the team! Find more information about the position at https://t.co/nCSCVkd5y8

Working at the Urban Assembly means working alongside some of the most passionate, committed, inspiring professionals in the field.